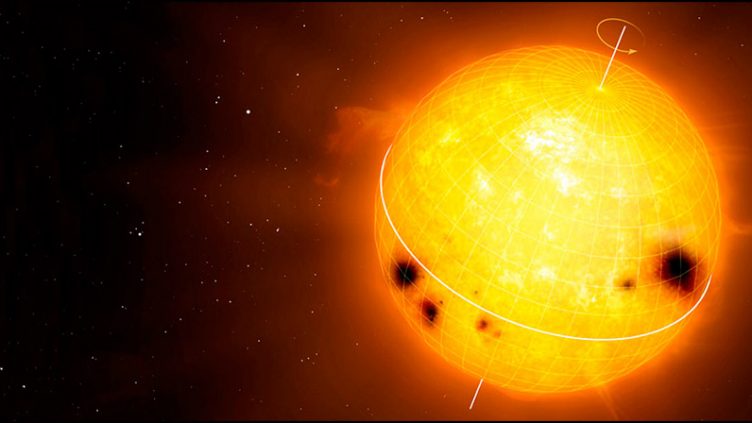 Artists impression of a star with a tilted axis in relation to the Earth (Credit: MPS/MarkGarlick.com)

Led by Instituto de Astrofísica e Ciências do Espaço (IA) researchers, a new study developed a method to measure, in an automatic way, the inclination angle between the Earth and the rotation axis of red giant stars.

Measuring stellar inclinations is fundamental to understand the formation and evolution of planetary systems. Using asteroseismic1 techniques, an international team2 led by Instituto de Astrofísica e Ciências do Espaço (IA3) researcher Charlotte Gehan, used the Kepler space telescope (NASA) to search for pulsations in 1139 red giant stars, to obtain information on the physical conditions inside these stars and measurements of their inclination angle.

Gehan (IA & UPorto), the first author of the paper4 now published in the Journal Astronomy & Astrophysics, comments: “We used asteroseismology to revisit the problem of inferring the statistical distribution of inclinations for large samples of stars, a powerful tool to probe the physical conditions that prevailed when stars formed”.

To Margarida Cunha (IA & UPorto), workgroup leader in international consortiums linked to missions like PLATO (ESA) and TESS (NASA): “Being able to accurately measure the inclination angle of the rotation axis of stars is crucial to constrain the evolution of their planetary systems.”

“We developed an automated approach that opens the way to unveiling the physical mechanisms driving the formation of stars inside hundreds of open clusters observed by the TESS space mission, which are still a matter of debate”.
Charlotte Gehan

They were able to develop a general and automated approach to derive seismic measurements of stellar inclinations, which can now be applied to any solar-type pulsator for which oscillation modes are identified.

This was the first automatic measurement of the inclination angle on a large scale and it shed a new light on how the statistical distribution of inclinations can be recovered for a random stellar sample.