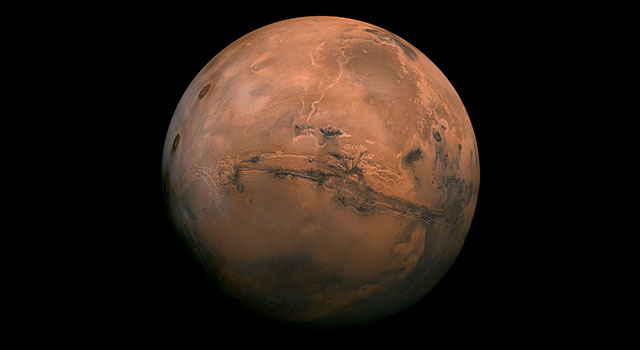 There is water on Mars, but up to recently we believed that it would be present only in the atmosphere and as water ice.

In general, the low temperature and the low atmospheric pressure on Mars do not allow the presence of liquid water. In the summer hemisphere, part of the ice in the polar cap, in the shadowed areas of craters and in canyons passes directly from the solid state to gas.

In September 2015, however, NASA – National Aeronautics and Space Administration announced data from the mission Mars Reconnaissance Orbiter that showed evidence of the presence of intermittent liquid water on Mars.

Salts on the planet’s soil may explain this fact. Throughout spring and summer, the ice below the ground melts and, through clefts in the ground, emerges to the surface as extremely briny water. The high concentration of salts preserves this water in the liquid state because it lowers its freezing temperature to about 70 ºC below zero.

This process may explain the dark streaks that develop along slopes, as in the image to the left.