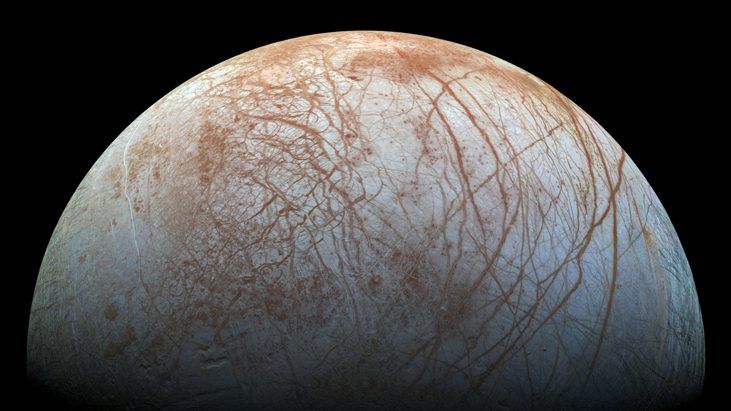 Europa is one of Jupiter’s icy moons, slightly smaller than our own Moon. It is thought that, below its icy crust, it may host a water ocean that completely covers its rocky interior.

If it actually exists, this ocean may be 100 km deep and hold more than twice the amount of water on Earth (the deepest area in the Earth’s oceans reaches only 11 km).

Jupiter’s tidal forces cause Europe to be stretched and contracted along its orbit, which generates frictional heat. This heat may be responsible for keeping the water in the liquid state and at roughly 20 ºC, which make it suitable for life as we know it.

Moreover, it is likely that at the bottom this ocean is in direct contact with the rocky mantle below, where volcanic activity would provide energy and nutrients for the development of life forms.

Evidence for the existence of an ocean in the moon Europa was obtained with Galileo spacecraft, by NASA – National Aeronautics and Space Administration, in the late 90s. This moon will be visited again by the JUICE mission, of ESA – European Space Agency, to be launched in 2022, and a new mission by NASA is also expected for the next decade.

JUICE is ESA’s mission with the largest budget so far, justified by the great importance of Europa to astrobiology research.