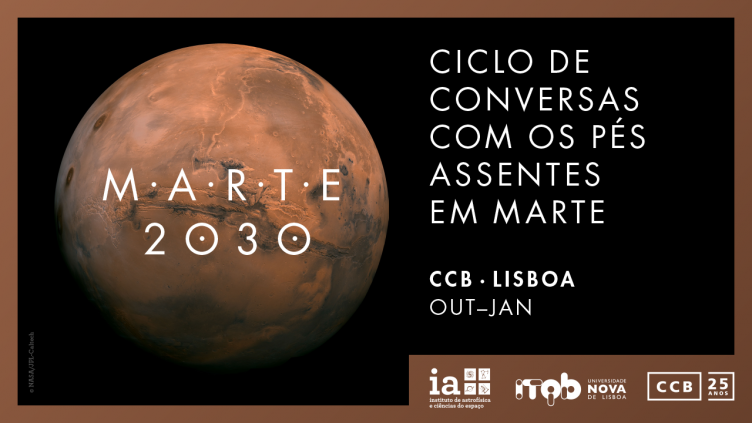 A series of conversations with both feet on the Martian ground

The reasons to send humans on a journey to Mars and the challenges it poses are the theme for a series of conversations with researchers, co-produced by the Instituto de Astrofísica e Ciências do Espaço, the Instituto de Tecnologia Química e Biológica António Xavier and Centro Cultural de Belém.

Mars 2030 is a series of conversations in interaction with the audience in which researchers will discuss the possibility of living on the red planet. The sessions will be held at Centro Cultural de Belém, in Lisbon, between October this year and January 2019.

They will cover the issues raised when we consider leaving our planet to test the human resistance on such a long journey to such an inhospitable place.

Programme of the series

The search for life on Mars and why we want to send people to the red planet.

The biological and technological challenges of the trip, the staying and the return.

Ways of surviving on Mars, from producing food to the needs in material and energetic resources.

Pedro Machado, of IA and FCUL, and Isabel Abreu, of ITQB-NOVA

This adventure may be the first step of a future of exploration, with other destinations aligned on the horizon, including the exoplanets, of which so many have already been found.

The series MARS 2030 will always take place on Saturdays from 21h00 to 23h00, in Sala Luís de Freitas Branco, at Centro Cultural de Belém. Prices are € 2.5 per session and € 8 for the whole series.