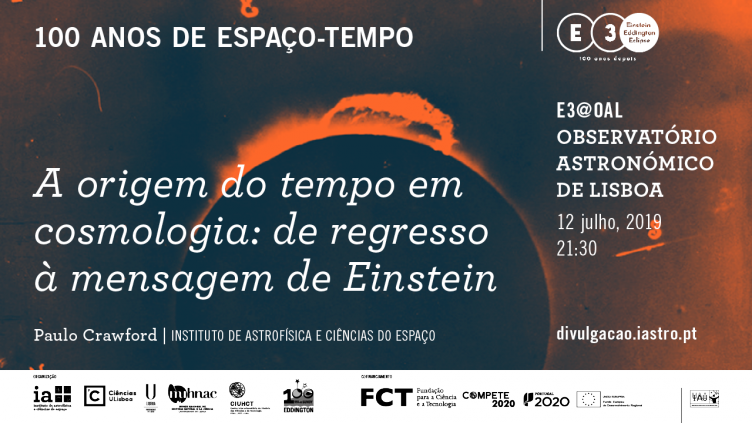 In the celebrations of the total solar eclipse of 1919, take part in astronomical observations, guided visits to a historical observatory, and a public talk dedicated to Einstein’s contribution to science.

The 29th of May marked the centenary of the observations of the total solar eclipse of 1919, in Sobral (Brazil) and Príncipe (São Tomé e Príncipe), which resulted in the confirmation of one of Einstein’s General Relativity Theory predictions.

The concept of a Block Universe, in which the past, present and future coexist, partly appears within the context of Einstein’s relativity theories. It represented a step forward in the removal of time from Physics theories, which was not totally reasonable for Einstein, as noticed in his hesitation in recognizing that these scientific descriptions failed to completely satisfy our human needs; there is something essential about the Now (the present moment) that is outside the realm of science.

It is within this context that Paulo Crawford, from Instituto de Astrofísica e Ciências do Espaço, will discuss the concept of Newton’s absolute time versus Einstein’s relative time, the removal of time in the frame of a Block Universe and the Rebirth of Time, within Cosmology, in a never ending conciliation struggle between general relativity and quantum theories.

All activities are free, but the talk is limited to the number of places available. The guided visits to the observatory require prior registration upon arrival.

Organized by IA, this event is part of the exhibition E3 – Einstein, Eddington and the Eclipse, framed within the project Eddington @ Sundy: 100 years after.

The Origin of Time in Cosmology: back to Einstein’s message (in Portuguese)

1st Guided visit to the Observatory

2nd Guided visit to the Observatory

3rd Guided visit to the Observatory

Throughout 2019, the International Astronomical Union (IAU) celebrates its 100 years of existence. IA joins the celebrations with multiple events.

The talk is limited to the number of available places.

The guided visits to the building require prior registration upon arrival. Registrations end at 0h00, or at the beginning of the first visit without registrations. It is not possible to register on a later visit if there are still places available in the previous one.