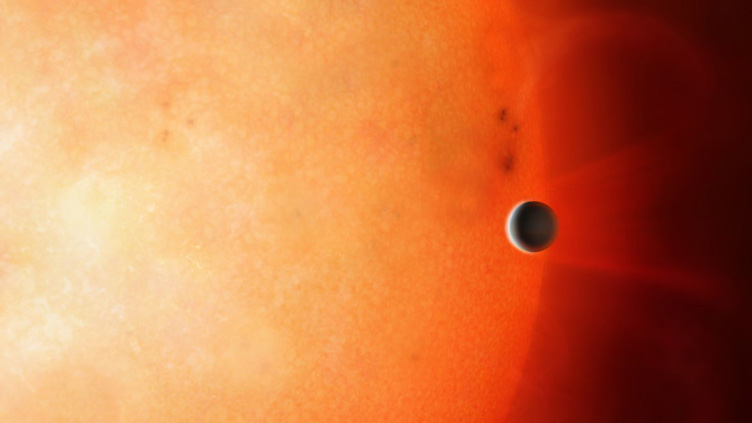 Artistic concept of a Neptune-like planet in the so called "Neptune desert", a region very close to the host star where it is extremely rare to find objects of this size and density. Credits: University of Warwick/Mark Garlick

The core of a planet stripped of its atmosphere might reveal the nature of the solid inner part of the giant planets in the Solar System, according to a study with the participation of eight researchers of Instituto de Astrofísica e Ciências do Espaço (IA).

A rare object was discovered, with the size of Neptune but twice its mass, and which looks like the core of a giant planet, without atmosphere, according to a study1 published today in the science journal Nature, on which took part eight researchers of Instituto de Astrofísica e Ciências do Espaço (IA). This body, orbiting a star 730 light-years away, challenges the theoretical models of planetary formation, and it will be an ideal target to try to understand the solid inner part deeply hidden under the thick atmospheres of the Solar System giants.

“This is amazing, because we cannot study the cores of the Solar System giant planets, but we can now study that of another planet nine million times further away.
Vardan Adibekyan

This research, led by the University of Warwick, in the United Kingdom, and with the important contribution of IA researchers2, analysed the exoplanet TOI-849b, discovered with the TESS satellite, of NASA, in 2018. Similar to Neptune in size, but three times denser, it is a body with the density of a rocky planet like Earth, but with 40 times the mass of our planet and five times that of Neptune.

“This planet looks extremely dense, and is actually, so far, the densest in its class of planets. It is very challenging to the theories of the formation and evolution of planets to explain the processes that created such a body,” says Sérgio Sousa, researcher at IA and Universidade do Porto, and co-author of the study.

With its mass, TOI-849b should have attracted more gas (hydrogen and helium) to build up a dense atmosphere such as those we see in Saturn and Jupiter. Instead, it exposes the bare primordial core from which these giant planets were formed. In these cores, matter is subject to high pressure, with properties still not well known due to the thick atmospheric envelope.

“Whatever the origin of TOI-849b, this should not be considered a full planet, but the core of a ‘failed’ massive planet, or with a disrupted history,” states Vardan Adibekyan, researcher at IA and Universidade do Porto, and third author of this study. “This is amazing, because we cannot study the cores of the Solar System giant planets, but we can now study that of another planet nine million times further away.”

One of the contributions by IA’s team, which was key to this study, was the identification of the properties of the host star, TOI-849, a star similar to the Sun but a little older. The team was then able to infer the chemical abundances in the planet and its ratios of iron and silicon, upon which it was possible to conclude that the planet’s atmosphere must comprise, at the most, only four percent of the total mass.

An unusual combination of inability to build up an atmosphere and to loose it in high quantities might be at the origin of this odd planet. Equally odd is the fact that it is located at a really short distance from its host star, something very rare for bodies with the size of Neptune. Orbiting the star in only 18 hours, the outer layer of TOI-849b is at a temperature of about 1500 degrees Celsius. Its past puts to the test the theories of how planets form.

TOI-849b was confirmed with several other instruments, including the HARPS spectrograph, installed at La Silla observatory, of ESO, in Chile. “Data from HARPS enabled determining the mass, and from this the unusual density of TOI-849b,” explains Susana Barros, researcher at IA and Universidade do Porto, and co-author of this study. “These data were gathered within one of the several programmes on which IA participates to characterise the composition of exoplanets and to estimate how often other ‘Earths’ are found in other planetary systems.”

“By continuing to find new planets, we are learning about the frequency of each type of planet. Is this a unique case, or are there more similar ones?,” says Sérgio Sousa. “On the other hand, from the theoretical point of view, we have to understand the physical mechanisms responsible for the formation and evolution of planets, which have to explain the diversity of bodies found, including giant and very dense worlds such as this.”

The researchers expect to study, in the near future, the residual atmosphere of this planet, which is likely to have been created from the evaporation of the solid material under the high temperature. This analysis will be possible with telescopes yet under construction, like the James Webb space telescope (NASA and ESA) and the ELT (ESO).