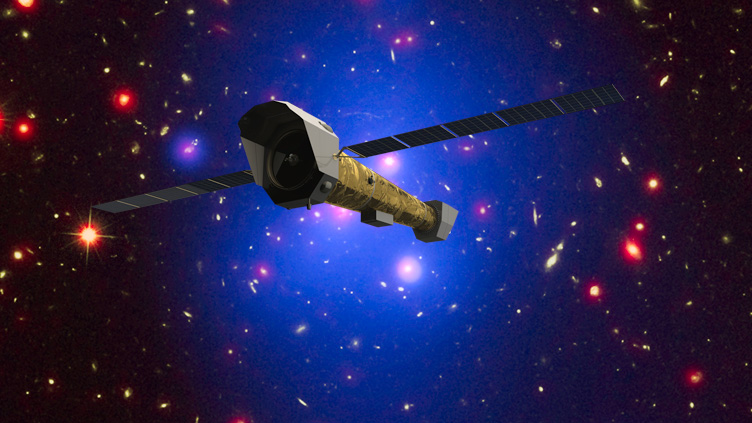 The Instituto de Astrofísica e Ciências do Espaço (IA) won the contract of the European Space Agency to develop a precision optical system for the future high-energy space telescope.

Seen in X rays, the Universe reveals extreme places, at temperatures of millions of degrees, or exceptionally energetic. These are also places that set the fate of the Universe and what we see today. The space observatory that will produce an X-ray scan of the Universe in the next decade is already being planned, and it will have a complete system which concept and design will be led by Portugal through the Instituto de Astrofísica e Ciências do Espaço (IA).

On the 23rd April, IA won the European Space Agency (ESA) call to lead one of the consortia of Athena (Advanced Telescope for High-Energy Astrophysics), one of the large missions of the long-term ESA’s programme Cosmic Vision. Athena telescope, with launch scheduled for 2031, will enable scientists to learn, among other goals, how black holes with the mass of millions of Suns dictated the formation of the first galaxies and the evolution of galaxies like our own, or how galaxies organised themselves into structures spanning hundreds of millions of light-years across and that are the “backbone” of the Universe.

“At IA we study the conditions in which galaxies formed near the beginning of the Universe. We are thus ensuring that, in a long-term vision, our research will be delivering new results through this unique observatory.”
José Afonso

In this two-year contract with ESA, IA will lead the development of a measurement system that will ensure the telescope mirror, of 2.5 metres in diameter, will be pointing precisely to the sensor of each of the two on-board scientific instruments.

Since 2013, IA researchers take also part in the development of one of these instruments, a wide-field imager, so that the institute is present both in the science and in the engineering of this forthcoming observatory dedicated to the high-energy Universe.

“The system that we will design is an optical instrument that checks the direction of the mirror and ensures that there are no lateral displacements with an error larger than a hundredth of a millimetre between the sensor of each instrument and the focal point of the mirror. But the mirror is 12 metres away. One needs a great deal of accuracy,” says Manuel Abreu, of IA and Faculdade de Ciências da Universidade de Lisboa (Ciências Ulisboa).

“Then, with the telescope already in space, there is an initial calibration process. The whole system suffered thermal tensions and vibrations inside the space rocket, and there’s a hight chance of it not arriving aligned,” Manuel Abreu adds. “We have to do this alignment remotely, to check that it is pointing to the right spot, and the same happens each time the mirror swaps between instruments.”

“We are in the phase in which the model will already have the final dimensions, with all the interfaces defined, how it relates with the other parts of the telescope, how it should stand the physical conditions, everything very close to the real model.”
Manuel Abreu

IA is responsible for the design and development of the measurement system, the concept of the optical component and testing, leading a consortium which includes three industrial partners. Two of them are Portuguese: FHP, that will develop the mechanical component of the system, and Evoleo, which is in charge of the electronic subsystems. Thales Alenia Space, in Italy, with extensive experience in the aerospace domain, will support the requirements development, the integration with the telescope and the definition of the verification tests.

“We are in the so-called phase B, in which the model will already have the final dimensions, with all the interfaces defined (electrical, mechanical and thermal), how it relates with the other parts of the telescope, how it should stand the physical conditions, everything very close to the real model, but not yet being the flight model,” Abreu explains. Within two years, a new call will be opened for phase C: the construction of the model that will go to space, following IA’s design.

Our institute is now connected in several ways to the Athena mission. Since the mission conception that IA contributes to the scientific requirements of the camera Wide Field Imager (WFI), participating in its consortium at the levels of coordination and the Scientific Team. “We are co-authors of the white papers that describe the science that will be made with Athena: what the telescope, with this camera, should be able to see, how far it should reach,” says Israel Matute, of IA and Ciências ULisboa.

Covering a large area of the sky, which is one of the revolutions to be introduced by Athena, WFI may detect in remote epochs rare X-ray sources a hundred times faster than current X-rays telescopes. “There are several processes that emit in X-rays,” Israel Matute explains. “Supermassive black holes in the centre of certain galaxies and which are actively attracting matter1 emit in X-rays, and we know that they have likely shaped the evolution of their own galaxy. These are very energetic processes, and thus they strongly influence the environment around them.”

“At IA we study the conditions in which galaxies formed near the beginning of the Universe, and the role of primordial black holes in the formation of galaxies,” says José Afonso, of IA and Ciências ULisboa, leader of the Portuguese participation in the Athena mission and member of the WFI Consortium Board. “We are thus ensuring that, in a long-term vision, our research will be delivering new results through this unique observatory. IA participation in the engineering of the telescope itself through its Instrumentation Group is a consequence of our involvement in several aspects of the mission.”

“It is important for us to be on both sides of the instrument, on the side of the one who makes it, and on the side of those who use it. This makes IA more complete,” says Manuel Abreu. “Our astronomers also need to know how the instruments perform and what they can ask for the new instruments. It’s a cycle that is constantly renewing and completing itself.”