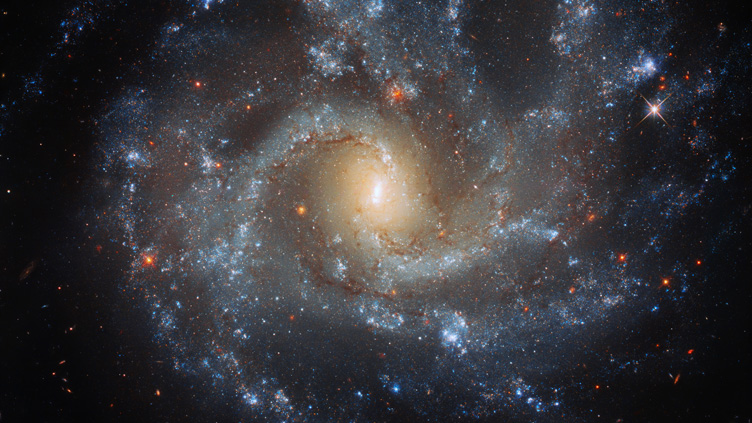 Using data from the CALIFA1 Integral Field Spectroscopy (IFS2) survey and advanced modeling tools, researchers from Instituto de Astrofísica e Ciências do Espaço (IA3) have obtained important results about the central spherical component (the bulge) in spiral galaxies like the Milky Way, shedding new light on our understanding of galactic evolution. The result was published in the latest issue of Astronomy & Astrophysics4.

It took several years and a lot of computational power to analyze approximately half a million spectra from a sample that covers all morphological types of non-interacting spiral galaxies. The team5 was able to measure, for the first time, the age variation of the stars in the bulge, from the center to the periphery, and understand the way this age difference relates to other galaxy properties, like the existence of Active Galactic Nuclei6 (AGN) or the total mass of stars in the galaxy.

“Our recent study lends support to the hypothesis that the least massive galaxies, which are now actively forming stars in the very center of their bulges, currently resemble a scaled-down version of the most massive spiral galaxies at their early evolutionary stages.”
Iris Breda

This work revealed that the stellar population at the center of the most massive spiral galaxies is older than the stars at the edge of the bulge, while in low mass galaxies the opposite happens – the youngest stars populate the center of the bulge, and the older are in the periphery. This result is in agreement with a previous study by the team, which had already found strong evidence for a unified scenario for the formation of spiral galaxies. Contrary to what is established, low and high mass spiral galaxies appear to be formed in the same manner, although high mass galaxies pass the same formation stages earlier and quicker than their lower mass counterparts.

According to IA researcher Iris Breda, the leading author of the paper: “There are many important lessons one can take from our study, the most relevant one being that bulges that are hosted by massive spiral galaxies cannot have formed in a quick and violent star-formation episode as it is commonly thought. To the contrary, these results support a scenario where these bulges are formed gradually within 2 to 4 billions of years.”

Breda, who developed most of this work during her recently finished PhD at IA and the Science Faculty of the University of Porto, concludes: “Together with our previous results, our recent study lends support to the hypothesis that the least massive galaxies, which are now actively forming stars in the very center of their bulges, currently resemble a scaled-down version of the most massive spiral galaxies at their early evolutionary stages.”

To FCT investigator Polychronis Papaderos, leader of the thematic line The assembly history of galaxies resolved in space and time at IA: “An AGN evacuates the bulge from cold gas, therefore shuts off star formation, first in its central part and, as time progresses, also in its periphery. This phenomenon results in a decrease in the mean age of stellar populations as we move from the center to the periphery of the bulge. By taking advantage of this fact, we invented a method to estimate the average velocity for the inside-out star formation quenching driven by the AGN. The relatively low velocity we infer (1-2 km/s) implies that the rise of AGN activity does not lead to a catastrophic episode of sudden removal of gas and an abrupt termination of star formation throughout the bulge.”

The leading participation of IA’s team in radio surveys, such as the “Evolutionary Map of the Universe” (EMU), offers ideal conditions for an unprecedented detailed study of the interaction of AGN with the ambient gas in galactic nuclei through deep radio-interferometry. This will allow them to look for small-scale radio-jets in bulges, which they believe went undetected from previous low-resolution radio interferometry observations.

The study of AGN activity since the Era of Reionization and its impact on galaxy evolution constitutes one of the main axes of research at IA.

To IA coordinator José Afonso (IA & Science Faculty of the University of Lisbon): “The finer details of galaxy formation and evolution are finally being explored, aligning unprecedented observations with revolutionary computational tools and modelling. These techniques will soon be taken to the next level, as we will be installing a new, powerful spectrograph, MOONS, at ESO’s Very Large Telescope. We will then have access to detailed observations of millions of galaxies during the heyday of galaxy evolution in the Universe, when the Universe was less than half its current age. IA researchers will be there, exploring those new observations and helping to better understand the assembly history of galaxies.”