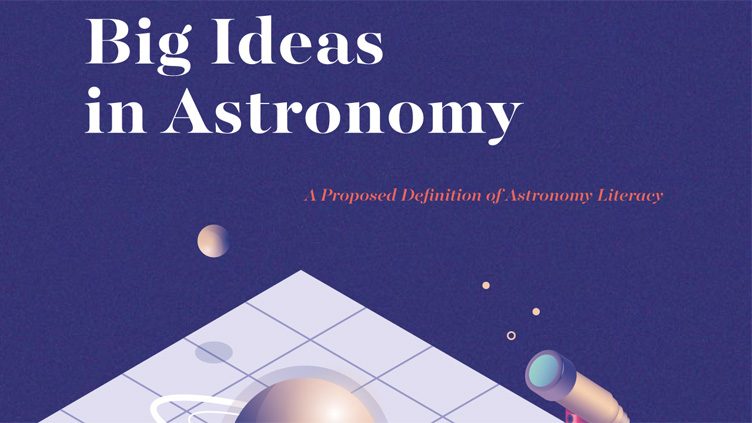 The first global document that proposes a definition for Astronomy Literacy is published today in open-access, and Instituto de Astrofísica e Ciências do Espaço (IA) is one of the authoring institutions.

Throughout history, Astronomy has revolutionised the way humankind sees its place in the Universe, from knowing only a handful of planets in the Solar System, to the billions of galaxies currently known. But to what extent has this knowledge been integrated into society?

This document raises the question: “What should citizens, anywhere on the planet, know about astronomy?”. It presents eleven “big ideas”, such as “We are all made of stardust”, or “We may not be alone in the Universe”, each of them structured in seven to ten supporting concepts. Its 65 pages cover a wide range of aspects of astronomy, from history to technology, from theory to observations, and also the social and philosophical dimensions, all anchored to topics that stretch from the Earth to the edge of the Cosmos.

“ʻBig Ideas in Astronomyʼ aims to be both informative and inspiring, showing the importance of astronomy to the society we live in,” says João Retrê. “It was designed to have a range of applications, such as aiding in the development of new resources for astronomy education, influencing school curricula, and providing a framework for governmental policy recommendations.”

This is an open document that draws a roadmap to the Astronomy Literacy goals. It is intended for use by the astronomy education and outreach community, but also to evolve with their contributions. For this reason, the document is published under a Creative Commons licence that allows anyone to share and adapt it, as long as appropriate credit is given. Editable (Google Document and Adobe InDesign) and non-editable (PDF) files are available online.

“ʻBig Ideas in Astronomyʼ aims to be both informative and inspiring, showing the importance of astronomy to the society we live in,” says João Retrê.

“It was designed to have a range of applications, such as aiding in the development of new resources for astronomy education, influencing school curricula, and providing a framework for governmental policy recommendations.”

“This much-needed document provides some of the building blocks for astronomy education,” says Pedro Russo. “Teachers, educators, curriculum developers and even textbook publishers can use these literacy goals to develop new and updated astronomy content and resources.”

The International Astronomical Union has set as part of its strategy to foster the use of astronomy in teaching and education at school level. “Big Ideas in Astronomy” adds to this goal, expanding on projects developed in other scientific fields, as in Earth Sciences, or the project “Big Ideas in Science”.

“This work is a step to bringing astronomy closer to citizens and creating a future impacted by this change,” highlights João Retrê. Pedro Russo adds: “This is just the beginning. As astronomy progresses, this document also needs to evolve and keep astronomy and science relevant for society.”

The project is led by the Instituto de Astrofísica e Ciências do Espaço (Portugal), Leiden Observatory, Leiden University (the Netherlands), with numerous collaborators and contributors from all around the world. It was produced in the framework of the IAU Commission C1 for Astronomy Education and Development, in particular, the Working Group on Literacy and Curriculum Development.