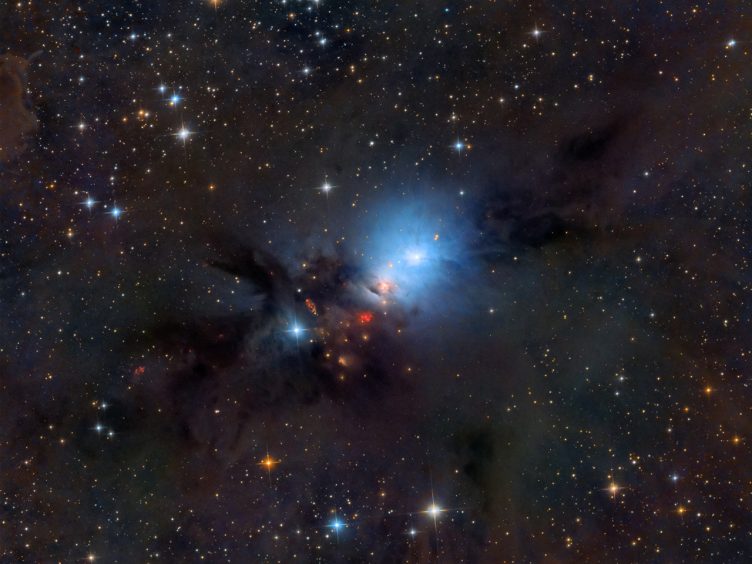 Nebula in the region of Perseu molecular cloud

Sun-like stars and planetary systems are known to form in interstellar molecular clouds composed mostly of hydrogen and small amounts of other elements like helium, oxygen and carbon.

Water is made in these molecular clouds and is in fact the third most abundant molecule in the warm regions around stars that are being formed here.

Comets and asteroids, in their migration to large distances from the central star, preserve water and other molecules throughout the stellar system’s evolution.

The energy released by the young star heats the surrounding regions and triggers chemical reactions. Within these reactions, hydrogen and oxygen are combined, producing water.

Water, as gas and ice, has been detected in discs surrounding young stars where planetary systems are born. In these so called proto-planetary discs, water freezes onto tiny dust grains and facilitates the agglomeration of aggregates that eventually evolve into asteroids, comets, and planetesimals, the seeds of future planets.

Comets and asteroids, in their migration to large distances from the central star, preserve water and other molecules throughout the stellar system’s evolution, and may later bring them to already formed planets. Such a mechanism is believed to have delivered water on Earth.

The Herschel Space Observatory, of ESA – European Space Agency, is one of the telescopes that has contributed the most to the detection and study of water in star-forming regions.