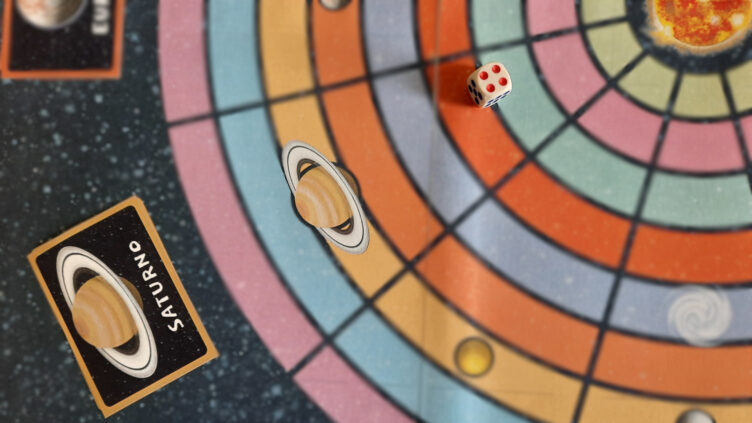 The Institute of Astrophysics and Space Sciences (IA) launches today a free educational board game that promotes group learning about the planets and moons of the Solar System and about astrobiology.

“E.T. phone home”. In this game, the quote from Steven Spielberg’s iconic film does not work. The players are the ones responsible for taking sixteen lost creatures from other worlds to their homes in the Solar System. This is the challenge that the Institute of Astrophysics and Space Sciences (IA) proposes to everyone, but in particular to those between 8 and 12 years old, so that they can become enthusiastic about the planets and moons of our cosmic neighbourhood, and about the conditions necessary for life beyond our blue planet.

ET – A Solar System Adventure” is a board game released online today in Portuguese and English, but also an educational resource, available free of charge, and scientifically validated by a Portuguese astrophysics research institute. “The aim of this game is to engage young people with Space and with the search for life beyond Earth, i.e., astrobiology. As a strategy, we used a theme that is already popular among our target audience: aliens”, says Catarina Leote, from the Science Communication Group of the IA and the coordinator of the project that, in collaboration with the Planetary Systems Group of the same institute, led to the design and production of the game.

Available in a “Print and Play” format, it can be downloaded for free and printed. After cutting and assembling it, one just has to gather pawns and a dice to start this fun adventure, accompanied by alien illustrations by Paulo Galindro and a board design by Sara Patinho. It is a fun and educational activity for families and a useful tool for teachers who want to introduce the world of astronomy to their students.

What are then the challenges posed to the players? First, they have to know their territory, that is, the worlds of the Solar System – the planets, but also several of its moons, some of them real targets of the current search for life beyond Earth. To do so, the players must answer questions, which give them access to information cards and mini-puzzle cards of the illustrations of the sixteen E.T.s. They can also trade cards with the other players to obtain a complete figure. Only then can they embark on the ultimate goal: guessing the world of origin of their extraterrestrial.

The creatures representing the E.T.s are all imaginary, but their anatomy was based on scientific facts about diverse environments in the Solar System. If these aliens really existed, they would almost certainly call these places “home sweet home”. “The discussion [about the creation of E.T.s] was of a scientific nature and therefore the information conveyed, which is related to the game’s environments, is good and solid science. The E.T.s were an interesting exercise of imagination”, says Pedro Machado, researcher at the IA and at the Faculty of Sciences of the University of Lisbon (Ciências ULisboa), and one of the researchers who participated in the creation of the game.

“The graphics were another priority. We created the E.T.s based on anatomical and physiological characteristics necessary to be adapted to their planets or moons, so there were conditions that had to be met in the drawings. The final result was a combination of our descriptions with Paulo Galindro’s talent and creativity.”
Catarina Leote

This board game also includes a helpful tool: a booklet with complementary information about planets, moons and small bodies in the Solar System, as well as essential notions about the search for life beyond Earth, or astrobiology.

The game “ET – A Solar System Adventure” was funded by the Europlanet Society as one of the winning proposals of the Europlanet 2020 RI Public Engagement Funding Scheme. In the next phase, there will be versions in other languages, such as Spanish, French and Italian.