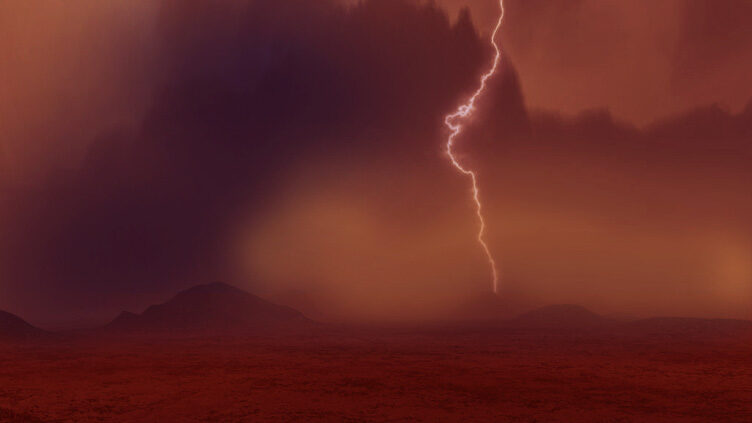 The most complete profile of Venus winds parallel to the equator on the nightside launches fresh clues on the possible link between the rampant greenhouse effect of the atmosphere and the violence of the winds at the top of the cloud deck, according to a new study led by the Instituto de Astrofísica e Ciências do Espaço.

Despite being close to Earth and having nearly the same size, Venus is another world. Underneath its thick mantle of acid sulfuric clouds, at the surface 460 degrees Celsius are the rule. This temperature is kept by the greenhouse effect of a virtually carbon dioxide only atmosphere.

Seventy kilometres above, one has to withstand a perpetual storm-like wind, the product of the so called Venus superrotation1. A team of researchers led by the Instituto de Astrofísica e Ciências do Espaço (IAstro) is even closer to explaining the link between these infernal features.

“Winds accelerate as we move upward to increasing altitudes, but we don’t know yet why,” says Pedro Machado. “This study throws much light on this, because we managed to study the vertical component of the wind for the first time, that is, how the energy from the lower and hoter layers is carried up to the top of the clouds, where it leads to the acceleration of the winds.”

A study2 published in the journal Atmosphere, led by Pedro Machado, of IAstro and Faculdade de Ciências da Universidade de Lisboa (Ciências ULisboa), presents the most detailed and complete set of measurements ever made, from an Earth-based observatory, of the speed of the wind on Venus parallel to the equator (zonal wind) and at the altitude of the bottom of the cloud deck.

One of the novel results was the concurrent measurement of the speed of the wind at two different heights 20 kilometres apart. The team registered a difference in wind speed of about 150 kilometres per hour faster at the top of the clouds, which gives clues about how energy is being transferred from the heat of the lower layers to feed the superrotation of the atmosphere.

“Winds accelerate as we move upward to increasing altitudes, but we don’t know yet why,” says Pedro Machado. “This study throws much light on this, because we managed to study the vertical variation of the westward winds, to help us understand the role of the solar tides and other waves in feeding this mysterious superrotation.”

The temperature at the ground level reaches 460 degrees Celsius and produces infrared radiation (named thermal emission), which heats the air and makes it move up. This radiation passes through the most transparent regions of the bottom of the clouds, at roughly 48 kilometres above the surface. When Venus is observed in infrared, we see this light radiate from the heat of the surface, and the silhouettes of the clouds, opaque and dark, become visible.

Observing and following the clouds at one hour intervals, and using a tracking technique improved by Javier Peralta, of Universidad de Sevilla and co-author of this study, the researchers indirectly computed the speed of the wind pushing those clouds. This speed is around 216 kilometres per hour at the bottom of the cloud deck and at medium latitudes, decreasing to half closer to the poles.

This work was undertaken almost from pole to pole on the nightside recovering imagens the team captured in the infrared with the Telescopio Nazionale Galileo (TNG), in La Palma, Canary Islands, between 11 and 13 July, 2012. On those same days and in a coordinated strategy, the Venus Express probe, from the European Space Agency (ESA), then orbiting the planet, observed in ultraviolet light the top of the clouds, about 20 kilometres above, at 70 kilometres of altitude.

Also tracking those clouds, the researchers obtained speeds in the order of 360 kilometres per hour. Other studies, and computer simulations indicate that the speed of the wind at the bottom of the clouds is nearly constant, without significant differences between day and night. The team was then able to assume that the wind speed registered at night is the same at the lower layers of the atmosphere on the dayside.

“We used the same geographic referencing method of the images obtained with space probes, which was developed by NASA and complemented by the European Space Agency,” Pedro Machado explains. “It’s as if the telescope here on the ground was a spaceship.”

The researchers thus collected, for the first time, measurements of differences in the wind speed between two altitudes from simultaneous observations, concluding that, on the dayside and in only 20 kilometres, the wind parallel to the equator suffers a boost in speed of about 150 kilometres per hour more.

The precision of the data collected with telescopes on Earth is, for the first time, comparable to the infrared cameras on space probes, also thanks to the method brought to this study by Javier Peralta. “We used the same geographic referencing method of the images obtained with space probes, which was developed by NASA and complemented by the European Space Agency,” Pedro Machado explains. “It’s as if the telescope here on the ground was a spaceship.”

With the success of this approach, the team will now expand their research on the vertical component of the winds with new observations from the ground coordinated with the probe currently in the orbit of Venus, the Akatsuki mission, of the Japanese space agency JAXA. This study demonstrates that the observations conducted from Earth complement the data being collected at the same time by space missions. Despite the lower spatial resolution, due to the distance our planet is from Venus, it is in general possible to have a global view of our neighbour, which space probes, due to their orbits, are not always able to get.

The next ESA mission dedicated to Venus is being planned, the EnVision. It will study the surface of the planet and try to learn about its past. Portugal is involved in the mission, and Pedro Machado leads the Portuguese consortium, in addition to being the co-investigator responsible for one of the instruments, an infrared spectrograph. “This work shows the kind of science that will be enabled with the EnVision instruments. We are already demonstrating the great relevance of the science that will be possible with this future mission.”

The experience of IAstro and of the Portuguese researchers in the understanding of the dynamics of the atmosphere of Venus will help select the wavelengths of light in which the EnVision mission will observe, as well as the most relevant atmospheric layers from a scientific viewpoint, thus contributing to the design and planning of the mission and its instruments.

It is also expected that the national participation in the mission will bring onboard the Portuguese industry in another ESA international project, with the perspective of the support of the Portuguese Space Agency, Portugal Space.