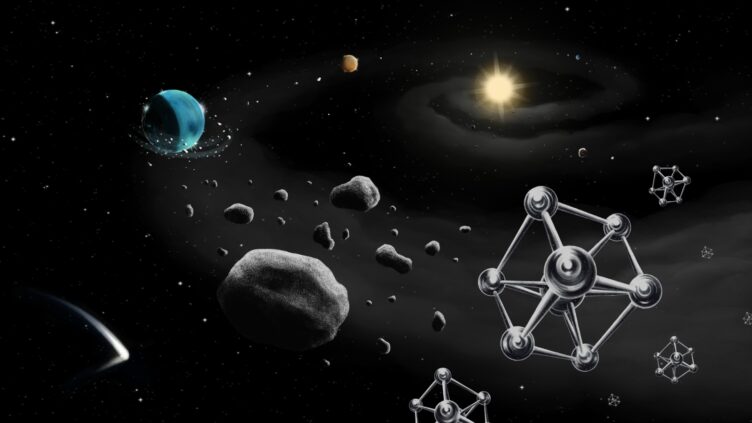 Led by a researcher from the Instituto de Astrofísica e Ciências do Espaço (IA), this work was published today in the journal Science. It shows that, although the composition between rocky planets and host stars does correlate, it is not one-to-one, as models previously assumed.

Newly formed stars are surrounded by a protoplanetary disk. A fraction of the disk’s material condenses into planet-forming blocks, and the rest eventually falls into the star. Because of their common origin, it was assumed that the composition of these building blocks and of low-mass rocky planets should be similar to the composition of their host stars.

However, so far the Solar System was our only available reference,  for which we know that the composition of major rock forming elements, such as magnesium, silicon and iron, in the telluric1 planets (with the exception of Mercury) is similar to that of the Sun.

In a new research2, published today in the prestigious journal Science, an international team3 led by Instituto de Astrofísica e Ciências do Espaço (IA4) researcher Vardan Adibekyan established, for the first time, a correlation between the composition of rocky exoplanets with the composition of their host stars. The team also shows that this relation is not, as previously assumed, one-to-one.

“Our work shapes models of planetary formation with a level of certainty and detail that is truly unprecedented.”
Vardan Adibekyan (IA & DFA-FCUP)

To Vardan Adibekyan (IA & Dep. of Physics and Astronomy – Faculty of Science of the University of Porto), the team found that: “the composition of telluric planets is intimately tied to the composition of the host star, pointing us in the direction of planets which can be similar to our own. We show that the iron content of these telluric planets is higher than one would predict based on the composition of the protoplanetary disks in which they formed. We interpret this enrichment in iron as attributable to the chemistry of protoplanetary disks and the specifics of planet formation processes.”

This was not unexpected, though, as the team was actively searching for this correlation. In order to accomplish this, the team selected 21 of the most precisely characterized rocky planets, using its mass and radius measurements to determine their density, as well as the amount of iron in the planets. They also used high-resolution spectra collected with state-of-the-art spectrographs mounted in large observatories around the world, such as Mauna Kea, ESO’s La Silla and Paranal and Roque de los Muchachos, to determine the composition of their host stars, and then deduce the composition of the most critical rock-forming components in protoplanetary disks. “

Nuno Santos (IA & DFA-FCUP) underlines that understanding the compositional link between stars and their planets has been a central topic for research in IA for more than a decade: “Using the greatest high-resolution spectrographs, such as the European Southern Observatory’s (ESO) HARPS or ESPRESSO, our team has been gathering spectra of exoplanet host stars for several years. These spectra are used to determine uniform stellar properties and abundances for the hosts, and the results have been compiled in the public SWEET-Cat catalogue”.

The new generation of extremely large telescopes and spectrographs will help to further this research. “In addition to allowing for the derivation of masses for lowest mass planets orbiting solar-type stars, ELT instrumentation, such as HIRES, will allow researchers to delve deeper into these studies by analyzing the atmospheric composition of rocky planets in detail, allowing for the exploration of additional clues about the star-planet connection”, adds Sérgio Sousa (IA & University of Porto).

The team also found an intriguing result. They discovered a gap between the iron fraction of super-Earths and super-Mercuries5, implying that these planets appear to be distinct populations in terms of composition, with implications to their formation.

This will require further study, since planet formation simulations that incorporate collisions alone are unable to reproduce the highest density super-Mercuries. Adibekyan adds: “Understanding the formation of super-Mercuries will aid in our understanding of the peculiarly high density of Mercury”.