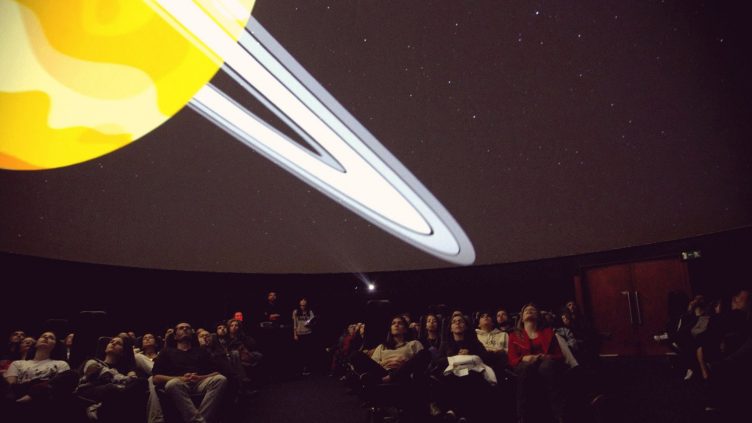 The results of the citizen science project CoAstro, a partnership between the Instituto de Astrofísica e Ciências do Espaço (IA), the Science Faculty of the University of Porto and the Porto Planetarium – Ciência Viva Center, were recentely presented.

CoAstro: @n Astronomy Condo is a citizen science project, which sought to find out if the engagement of elementary school teachers in astronomy research facilitates dissemination, of both results and scientific processes, to school children and other members of the school community.

This research project, coordinated by the Porto Planetarium – Ciência Viva Center and developed at the Science Teaching Unit (UEC) of the Faculty of Sciences of the University of Porto (FCUP) and at the Instituto de Astrofísica e Ciências do Espaço (IA), was the theme of Ilídio André Costa‘s PhD thesis. Costa is a teacher at the Santa Bárbara School (Fânzeres, Gondomar, Portugal), but is currently deployed at the Centro de Astrofísica da Universidade do Porto (CAUP), developing activities at the Porto Planetarium.

To Costa, the self-titled “condo administrator”: “CoAstro allowed us to see how a citizen science project, without self-human resources or self-founding, can contribute, with lasting and wide-ranging effects in terms of public, for school to open itself to the surrounding community and vice-versa and how the public can open up to research and the latter to the public”.

One of the project’s supervisors is Carla Morais (UEC & Dep. of Chemistry and Biochemistry of FCUP), who adds: “The CoAstro project allowed elementary teachers, astronomers and science communicators to participate for several months, in a collaborative way in astronomy research and science communications activities”.

In the first phase, elementary school teachers participated in two research projects at IA, one related to the determination of stellar parameters and the other to the detection of exoplanets.

In the project “Stars”, teachers analysed stars standard spectra and calculated their luminosity, using the Data Release 2 from ESA‘s GAIA mission. In the project “Planets”, after learning to code in Python, the teachers produced a video of a Mercury transit.

They also analysed light curves obtained with the TESS satellite (NASA), to signal the possible presence of exoplanets via the transit method, through Planet Hunters citizen science project webpage.

“The project constituted a way to reach awareness, understanding and engagement with science and with the nature of scientific knowledge, having achieved expressiveness not only through the committed and competent participation of all direct stakeholders, but also through its extension to the target community of the science communication initiatives – teachers, students, parents, other members of the schooll community “, comments Carla Morais, who is also a researcher at the Centro de Investigação em Química da Universidade do Porto (CIQUP).

In this way, astronomy directly reached around a thousand participants, but due to the multiplicarion effect of influences which school fosters, it should have indirectly reached a much larger number of people which is not possible to count.

In addition to the scientific contributions to astronomy research, the CoAstro results reveal, for elementary teachers, an increase in astronomy knowledge and in the processes involved in the production of knowledge. There was also a change in their attitudes and beliefs towards astronomy, as well as an increase in the quality of their science communication practices.

For IA researcher and director of the Dep. of Physics and Astronomy of FCUP, Mário João Monteiro: “This project, as a case study, was important because it allowed different communities – science communicators, researchers, teachers – to explore how they could collaborate to the benefit of all involved, and still have a significant impact on the communities connected to these professionals. Astronomy can be a good starting point to reinforce the role and importance of science in society through a citizen science project with very particular characteristics”.