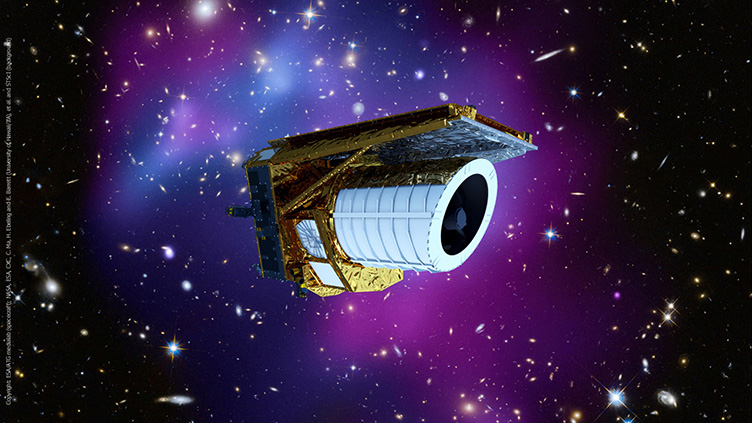 A prize from one of the large European Space Agency missions was awarded to a team with a strong participation of Instituto de Astrofísica e Ciências do Espaço (IA).

The international role of Instituto de Astrofísica e Ciências do Espaço (IA1) was once more acknowledged, now within one of the major European Space Agency (ESA) missions. The consortium of the Euclid2 mission, a space telescope that will probe the dark Universe and is scheduled to be launched in 2022, awarded the Euclid STAR 2020 prize in the Team category to one of the consortium groups with a strong Portuguese and IA participation.

The Euclid Survey Group (ECSURV) is responsible for producing the calendar of the sky mapping to be undertaken by Euclid, with its roughly 40,000 observations. It establishes what region of the sky the telescope will be looking at for each moment of the mission’s lifetime of more than six years3. The group sees thus recognized their exceptional contribution to the success of the Euclid mission4. Created in 2012 and with a Portuguese participation since the beginning, it currently includes four IA members, in addition to nine other members from Italy and France.

The planning produced by ECSURV is a fundamental piece for all the science and instrumentation of the telescope, and touches nearly all the components of the mission, states Ismael Tereno, a researcher of IA and of Faculdade de Ciências da Universidade de Lisboa (Ciências Ulisboa), and coordinator of the Portuguese team of ECSURV. “Scientists centred on the focus of the mission want to know the progress of the observations and what will be available at each data release,” Ismael Tereno explains. “Those who will explore the other scientific sides need to know if the surveys will enable those scientific cases. Thus, it is a product with great visibility in the Euclid community.”

João Dinis is responsible for the development of the computer programme that builds the reference survey. Researcher of IA and Ciências Ulisboa and a member of ECSURV, he jumped into this task in 2013, in a team work that at first also involved C. Sofia Carvalho, researcher of IA and also member of the group. João Dinis says that it has been challenging. “There are a myriad of constrains that the satellite must obey and which limit the observations plan: its movements and turns are limited, and each calibration field must be observed in a specific way. It’s great to have now the recognition of a work that is well done. It gives you a new encouragement.”

“The Euclid project is the most ambitious human effort to map the cosmos from space, and will be a reference for many years to come,” stresses Jarle Brinchmann, researcher and member of IA’s Executive Board, and coordinator of the Scientific Legacy at the Euclid consortium. “This map will combine data from large surveys already made with ground-based telescopes with exquisite data obtained with Euclid. We will rely on the excellent work done by the surveys team to coordinate and calibrate it all.”

The work of the group continues and a new important phase is approaching. In October, they will submit the surveys and calibrations plan to a review by ESA, a special moment, in face of the proximity of the launch date, scheduled for August 2022.

The group was nominated to the Euclid STAR 2020 – Team award by the Euclid consortium community itself, which gathers more than 1500 members from 14 European countries, United States and Canada. “We have a small participation when compared to those of the main countries, and it is very satisfactory to see that, besides that, it is having a great impact and visibility,” says Ismael Tereno.

Launched in 2017, these awards, of symbolic nature, acknowledge annually the exceptional contributions to the mission made by members and groups of the consortium. The prizes were announced on 6 May and were also awarded in the categories Student, Junior Engineer, Junior Scientist, Senior Member and Coordination.

“It is with great pride on the whole national team that I see this award happening,” says António da Silva, researcher of IA and Ciências ULisboa, member of the Euclid Consortium Board and also member of the surveys group. “For this kind of participation in an European mission, it was essential the support of our institutions and of the funding agencies, FCT and, more recently, PT SPACE.”