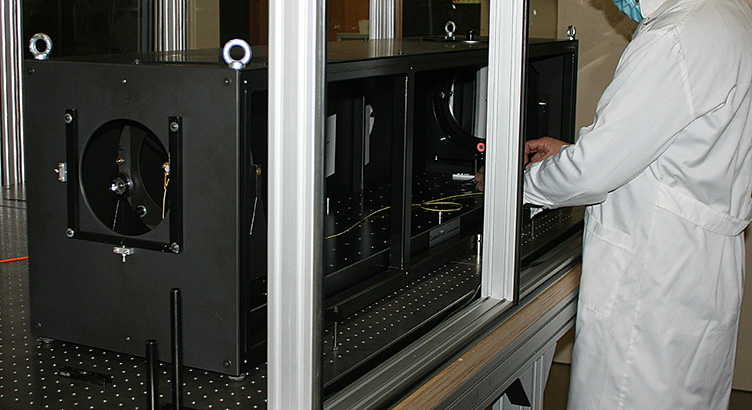 An optical calibration system produced by the Instituto de Astrofísica e Ciências do Espaço (IA) for the PLATO space mission has been trusted by the European Space Agency (ESA) for a third direct order, outside the consortium.

The PLATO mission, of the European Space Agency (ESA), will be launched in 2026 and will try to answer the question: How common are the planets similar to Earth? It has the goal of detecting planets like ours, in size, density and distance to the host star, orbiting thousands of stars like the Sun relatively close to the Solar System. Some of these planets might present conditions suitable for life as we know it.

The Instituto de Astrofísica e Ciências do Espaço (IA) is involved in this mission, both at the scientific level and the data analysis and engineering. The PLATO space observatory will be the first example in space of an instrument made of several telescopes.

In all, there will be 26 optical cameras that will monitor the change in brightness in the visible light of thousands of stars in a wide region of the sky. In the areas where the cameras overlap, it will be possible to have independent measurements and statistical redundancy.

The Systems and Technology group at IA produced a fundamental piece to ensure that the 26 “eyes” of PLATO will be strictly identical to each other and will provide coherent data. “We produced an optical reference system that creates a beam of white light of large diameter, about 20 centimetres, very uniform across the whole of its section, and with high levels of collimation and stability,” says Manuel Abreu, of IA and Faculdade de Ciências da Universidade de Lisboa (Ciências ULisboa). “This beam of light will work as a standard for the integration of the telescope of each PLATO camera, together with its corresponding CCD sensor.”

“The collimator concept is nothing completely innovative. The problem is always the specifications we have to fulfil and which go beyond any regular design. We have to invent solutions, use special techniques, and create something that does not yet exist.”
Manuel Abreu

Named collimation unit, this piece will be used not only to configure the 26 cameras of the final observatory, that will go to space, but also those of the intermediate development models, that will be tested in conditions close to operations in space. The great challenge is in the fact that each camera requires four months to be strictly aligned and tested to respond to the mission specifications, in a vacuum environment 80 degrees Celsius below zero.

Within the mission consortium work, the IA team produced two collimation units, with national funds through the PRODEX programme, of ESA, funds managed by the Portuguese Space Agency (Portugal Space).

The first unit was delivered in August 2020 to the Liége Space Centre (CSL, Belgium), the centre responsible for the assembly and integration of the cameras, and the second will be delivered this April. Although the task has already been distributed across four countries (Belgium, Spain, France and the Netherlands), the European Space Agency (ESA) decided to order directly to IA a third collimation unit, to be used in their own test centre, in Noordwijk, in the Netherlands.

“The collimator concept is nothing completely innovative,” says Manuel Abreu. “The problem is always the specifications we have to fulfil and which go beyond any regular design. We have to invent solutions, use special techniques, and create something that does not yet exist.”

This is an additional request to the contract within the PLATO consortium, and will be funded exclusively by the European Space Agency itself, with estimated delivery by IA in July. “This reflects ESA’s recognition and trust on the quality of the equipment IA produced,” comments Manuel Abreu. ESA will pay 90 thousand euros for this additional unit, which may be seen as already one of the returns of the national investment in this European mission.

“This value will mostly cover all the materials needed for the new system, and is fully funded by the European Space Agency,” says Abreu. “It will be about 50 thousand spent locally, in human resources and equipment, and 40 thousand in materials provided directly by ESA.”

IA’s Systems and Technology Group has specialised in the development and testing of high precision measurement equipment, or metrology, preparing people and laboratories for levels of complexity and demand as those of the specifications requested by the European Space Agency missions. Part of the funding of this ESA purchase will be used in acquiring new materials and equipment of precision metrology.

“For us to develop equipment with complex specifications, we always have to have better measurement instruments, that are able to correctly validate what will be delivered to the client,” says Manuel Abreu. “Our capacity in metrology is based on equipment that we have been investing in through the years, and on others we custom developed ourselves for each case.”

IA leads the national contribution to the PLATO mission with contracts in both the scientific and technical sides. In addition to this participation in the domain of optical metrology, for which the Systems and Technology group relied also on the Portuguese industry, which produced all the mechanical structure of the collimation units, IA also leads working groups, namely at the level of the Data Centre of the mission, with responsibilities on the design, implementation and validation of algorithms that will caracterise the stars and classify candidate planets.