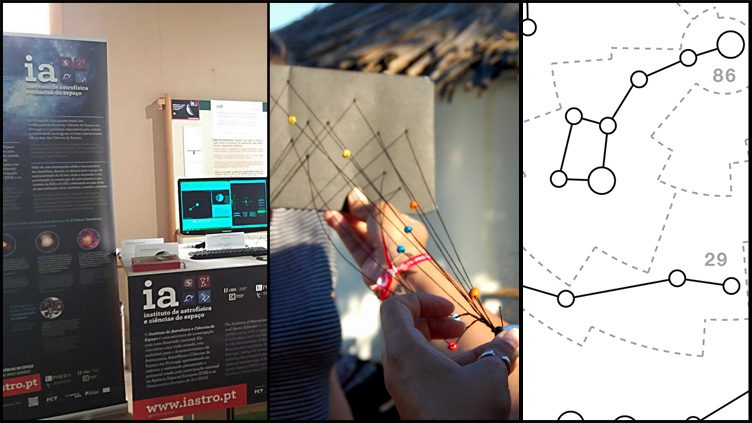 In this year’s European Researchers Night accept our invitation and take part in the many activities organised by IA or which we are joining.

Identify the constellations and compare the Sun with other stars. Discover the large number of stars we can’t see in the cities. Participatory activity using paper and coloured pencils.

With the stars in between our fingers

Build a star distribution pattern of some of the Summer sky constellations and imagine what would be the name of the constellations if we could see them from another place in our galaxy.

If you could study the Universe, what would you like to discover? How is Astronomy useful to society? Leave us your answers in a collaborative panel.

Observation of the night sky with telescopes

Come and see through telescopes some of the celestial objects visible tonight. This activity depends on the weather conditions.

Noites no Observatório – Closer to the Unreachable

New Earths, the first light of the Universe, and perhaps even the discovery of other life forms – everything seems to be already on the horizon…

This session of Noites no Observatório will take us to the wake of a new era of astronomy and even a little closer to the unreachable.

The entrance is free but requires a registration. More information here.

Observation of the night sky with telescopes

Come and see through the telescope some of the celestial objects visible tonight. This activity depends on the weather conditions.

Despite the event Noites no Observatório, on 29th September, being free of charge, the access to the activity requires a registration here.