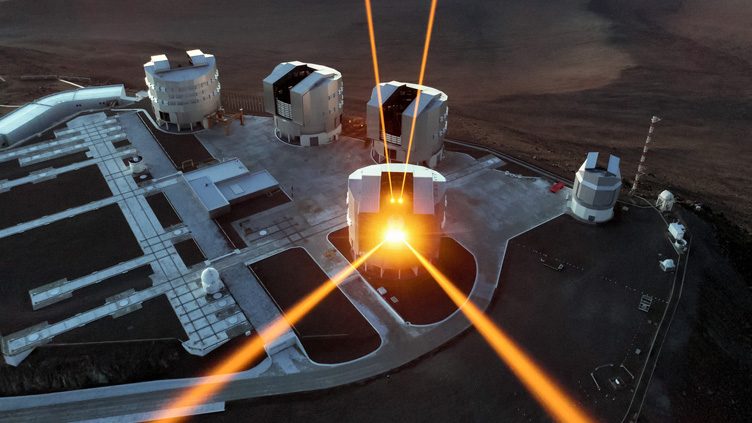 The intense laser beams that enabled an alternative calibration technique for the future discoverer of other Earths. These beams were conceived to correct the effect of atmospheric turbulence on images of the sky obtained at the Very Large Telescope (VLT), of ESO, but now, when observed through ESPRESSO, allowed the validation of the accuracy of the instrument, necessary for its scientific goals. Credits: ESO/G. Hüdepohl (atacamaphoto.com).

The search for exoplanets will get to the next level with the detection and characterization of Earth-like planets. A new instrument in this quest is the ESPRESSO1 spectrograph.

With Portuguese participation, it is installed in one of the best telescopes in the world, the Very Large Telescope (VLT), of the European Southern Observatory (ESO), in Chile. It will enable the detection, in the light of the stars, of the tiny effects induced by planets as small as Earth.

One of the effects of the presence of exoplanets is on the motion of the star. For this reason, ESPRESSO will have to measure the velocity in the movement of the stars with deviations from the real value not exceeding ten metres per second. An alternative technique was now discovered that is capable of calibrating the data of this spectrograph in order to attain such an accuracy.

It uses a system already available at the VLT, although created for other purposes, and is announced in a paper published in the Physical Review Letters, the outcome of a study led by Frédéric Vogt, of ESO, with the participation of Pedro Figueira, of ESO and Instituto de Astrofísica e Ciências do Espaço (IA), and Alexandre Cabral, of IA and Faculdade de Ciências da Universidade de Lisboa (FCUL).