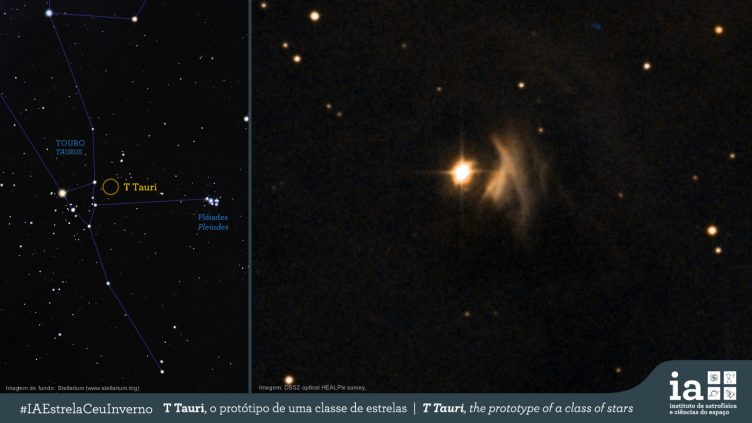 T Tauri is a variable star in the constellation of Taurus that is located roughly at a distance of 470 light-years.

This star was discovered in 1852 and today is generally considered the prototype of a class of variable stars that received its name. Among them, T Tauri, is the brightest yet known.

The systematic study of T Tauri stars was only undertaken as late as the 1940s.

One of their most salient features is their link with nebulae. These are star formation regions where the processes of formation and evolution are responsible for the apparent fluctuations in the brightness of these stars.

Consequently, the term ‘T Tauri class’ is used nowadays to describe young stars of little mass and still under gravitational contraction, before the outset of nuclear reactions inside them.

So, these are stars with less than two or three times the mass of the Sun, and aged only a few million years.

The study of this class of stars allow us to gain an understanding of the evolution of our own star, the Sun.

Author: Jorge Gameiro
Researcher of IA in the thematic line “Towards a comprehensive study of stars”.