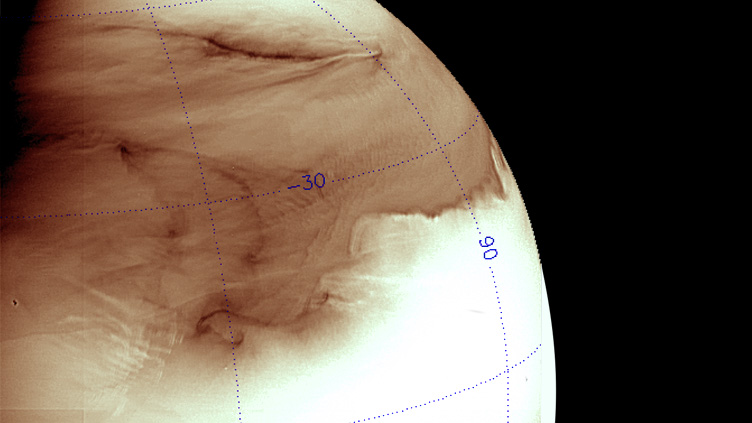 The largest ever quest for atmospheric wave patterns on the night side of Venus, and a new window onto vertical winds, are the two recent major insights into the super rotating cloud level of the planet, made by researchers of the Instituto de Astrofísica e Ciências do Espaço (IA).

On a slow rotating planet such as Venus, but with constant winds beyond the most devastating hurricanes on Earth, any light breeze might be part of the key to the puzzling “super-rotation”1 of its atmosphere. Now, two studies led by researchers of the Instituto de Astrofísica e Ciências do Espaço (IA) contribute to the ongoing endeavour to understand what makes Venus’ airy shell spin so fast.

A study2 led by José Silva, of IA and Faculdade de Ciências da Universidade de Lisboa (Ciências ULisboa), published in Astronomy & Astrophysics, searched for wave patterns in the lower clouds, at around an altitude of 47 kilometres, in more than 5500 images from the archives of two space missions to the planet. It is the largest ever quest for atmospheric waves on the night side of Venus, and is now a database that may hint at what is creating them.

“The role of atmospheric gravity waves in the circulation of the atmosphere is still fuzzy, but the data we present may help the work being currently done in atmospheric modeling, if it includes our results to improve the predictions.”
José Silva 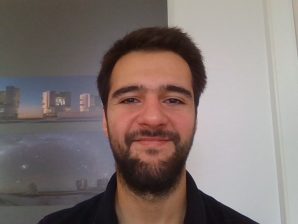 “Atmospheric gravity waves3 have been a target of increasing interest due to their role in the transport of energy in planetary atmospheres,” says José Silva. “They may be one of the keys in explaining the mechanism that generates and sustains the super-rotation of the Venus atmosphere.”

In a low region of the atmosphere, close to the lead melting temperature of the planet’s surface, the air flows like water in a boiling pan. Its convective cells could power waves that, in turn, may force the dynamics of the upper layers, at about 70 kilometers, where the main flow is rushing.

But they may not be the only source of waves, according to the researchers’ analysis of archived infrared images. These were taken in 2007 and 2008 with the Visible Infrared Thermal Imaging Spectrometer on board of Venus Express mission, of the European Space Agency (ESA), and in 2016 with the IR2 instrument on board of the Japanese space agency JAXA’s Akatsuki mission.

“The atmospheric gravity waves that are found at the lower clouds may have more than just one dominant triggering source, considering their great diversity. Their role in the circulation of the atmosphere is still fuzzy, but the data we present may help the work being currently done in atmospheric modeling, if it includes our results to improve the predictions,” José Silva explains.

Full physics computer simulations of the atmosphere, in which IA researchers are also actively involved, have shown that vertical wind differences (in speed or direction) within a short distance can affect the wavelength and direction of atmospheric waves, and in a way that is consistent with what this study found about the properties of these waves.

Precisely, the study of vertical winds, and vertical transport, has gained a new window. Two measuring techniques used simultaneously but millions of kilometres apart, from telescopes on Earth and orbiters right over Venus, were found to be probing horizontal wind speeds at two slightly different altitudes. This result4 was published in the science journal Atmosphere and was led by Pedro Machado, of IA and Ciências ULisboa, also co-author of the first paper mentioned.

“This difference is very important, because we can study and estimate the vertical component of the wind, moreover in a region of extreme interest in dynamic terms,” says Pedro Machado. “That is the zone where the atmosphere accelerates up to reaching a maximum of the zonal wind (parallel to the equator) and of the meridional wind (perpendicular to the equator).”

Machado’s group is measuring the horizontal speed of both the zonal and the meridional winds through a technique developed at IA. This technique uses the Doppler shifts5 in the sunlight reflected by Venus clouds towards telescopes on Earth. Its precision, using high resolution spectrographs at the Canada France Hawaii Telescope or ESO’s Very Large Telescope (VLT), in Chile, is remarkably comparable to that obtained with the costly space missions that have been surveilling the movements of the clouds right over Venus: Venus Express and Akatsuki.

“Throughout the years, we have been measuring wind speeds that are very consistent, but also systematically higher, in about 40 or 50 kilometres per hour, than those measured with data from images of cloud tracking,” Pedro Machado says.

“Now, with the solid evidence that we are actually studying two different altitudes, with our observations with telescopes probing two or four kilometres above, we will plan coordinated observation projects from space, with the Akatsuki probe, and from the ground, in order to produce the map of the vertical component of the wind.”

Different wavelengths probe different altitudes, with visible and ultraviolet light being reflected by features of the upper clouds, and infrared revealing the deeper layers. “The next step will be to investigate the propagation of the atmospheric waves to other altitude levels. How much energy are they able to transport, and how effective are they in boosting the super-rotation?,” José Silva asks.